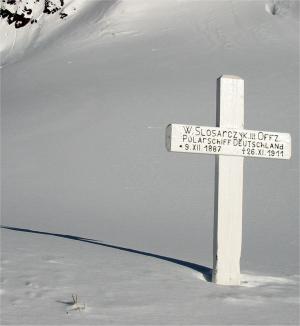 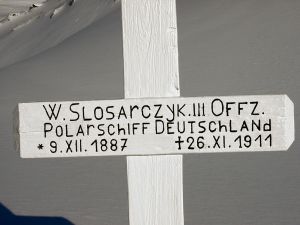 Walter was Third officer and Wireless Officer on Wilhelm Filchner's vessel Deutschland. He went out in a small boat from King Edward Cove and was never seen again. The boat was found floating way outside Cumberland Bay. His memorial cross can be seen on the hillside at Grytviken, overlooking the cemetery.

In the book 'To the Sixth Continent - The Second German South Polar Expedition' by Wilhelm Filchner (1922) translated by Willian Barr in the 1994 Erskine Press / Bluntisham Books edition, we read:

Walter Slossarczyk, third officer aboard the expedition ship Deutschland went to a seaman's death near Mount Duse, by the Sappho Light on South Georgia.

On the evening of 26 November 1911 we were sitting chatting in the mess when Slossarczyk asked for the dinghy, with the intention of relaxing after the day's work by a boat trip in Cumberland Bay. A cool breeze was blowing down the valley from the glaciers and the delicious night air filled one's lungs. The little boat. propelled by Slossarczyk's strong arms soon disappeared from the watch officer's sight......

Night fell, and gradually the rumour went timidly round the ship; 'Slossarczyk is not back yet!'

Chains rattle, words of command ring out, steps resound on deck planking, a rope splashes into the sea, screws churn in the water and one vessel gets under way from the row of agile whale catchers which are moored overnight. Black smoke belches from her funnel and slowly, but then gathering full speed, the ship slices through the waves out towards the outer harbour.

The ship's whistle wails horribly in long, muffled tones through the night. First the red light and then the green of her navigation lights wink from the far distance; they are searching to and fro for our colleague. The whale catcher slid out into the open sea, steamed several times along the shores of South Fjord and at dusk reached the Nordenskjold glacier; it cruised out of the bay and also searched a little way into West Fjord.

Towards morning Don Ernesto returned to Grytviken. The search had been fruitless. Next day a renewed diligent search by several whale catchers. Equally fruitless.

On 29 November an inbound whaling steamer brought back the dinghy. It had been recovered in the open sea near Sappho Light. The oars were in the boat, but it did not bring back the man who had put out in it. It was mute and gave us no clues.

Slossarzcyk had striven for the expedition with every fibre of his being, for the task which lured us to the icy south,and he would have been one of the most competent in terms of work and results. Now the waves had closed over him and he had died the death which only in the past few days he had described to us as the most beautiful: a seaman's death.

As a memorial to him down there in the Far South I gave his name to a bay at the southwest end of the island.

Earlier in the book Filchner tells us:

. . . I had a cross erected near the waterfall in memory of our third officer Slossarczyk; the name and date of death of our dear comrade, as well as the name of the ship, were inscribed on it.