"...the said WILLIAM BARLAS came by his death as a result of shock and drowning cuased through an avalanche of snow carrying him out int the water and do further say that he came to his by ACCIDENT."

We are also told that a Mr O'Sullivan was with him and was also swept out but survived. There had been a heavy (two feet) snowfall the night before.

William Barlas spent thirty-three of his 53 years living in the Falkland Islands and their dependencies. Born in Matlock, Derbyshire 8 May 1888, he was educated at the Pitlochry High School, Perthshire and Thomson’s Academy in Dundee. Barlas came out to the West Falklands Island in February 1908. For the first five years he was employed as a travelling schoolteacher before being appointed as acting Headmaster at the Government School in Stanley in June 1913 for a short period.

A series of government bureaucratic appointments followed. These included Acting Stipendiary Magistrate, Coroner, Deputy Receiver of Wrecks, Deputy Collector of Customs and Postmaster of South Shetlands Islands (November 1914); Junior Clerk in the Colonial Service Office, Stanley (April 1915); Magistrate and Deputy Collector of Customs, New Island (March 1916) and Deputy Magistrate for South Georgia (January 1920). During the 1920’s he held various interim appointments in Stanley, most notably Chief Clerk and Clerk of Councils including the Governor’s Private Secretary, Local Auditor, Acting Magistrate and Acting Colonial Postmaster. Barlas also served as Justice of the Peace for the Dependencies from 1919 to 1941.

William Barlas or “Wullie” as he was affectionately known was a keen sportsman, actively participating in golf, football and athletics. He was remembered as an avid cricketer and a particularly good medium-paced bowler. He was also very involved in various theatre productions. His obituary commented on his “excellent portrayal of Spettigue in the play ‘Charlie’s Aunt’ in Stanley in 1937.” His friends described him as a modest, unassuming man, with kindness always radiating from his spectacled eyes. He was married to Christina Scott Robertson of Pitlochry, Scotland.

A regular member of the Falkland Islands Defence Force since 1914, Barlas was appointed Officer Commanding the South Georgia Defence Force with the commissioned rank of Lieutenant in 1940. He was awarded The King’s Silver Jubilee Medal in 1935 and in 1941 was appointed M.B.E. in the New Years Honours List. He is also believed to have performed the first marriage service in South Georgia, this between his Postal Clerk, Mr. Nelson Jones and Ms. Vera Riches in 1932.

On 2 September 1941 he was unexpected killed by an avalanche at King Edward Point. He is buried in the cemetery at Grytviken. Barlas’ memory lives on. Barlas Bank (a small submarine bank 1.5 mile South East of Cape Buller), Barlas Channel (in the northern part of Laubeuf Fjord near Adelaide Island) and Cape Barlas (the Cape marking the northern end of Fredriksen Island in the South Orkney Islands) are all named after him.

(This article is lifted almost verbatim from Neil Donen's article in 'The Flagstaff' - the journal of the King Georga V Silver Jubilee Study Circle. Thanks Neil. 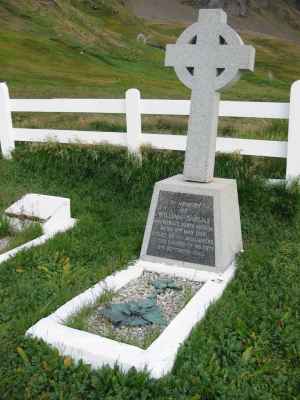 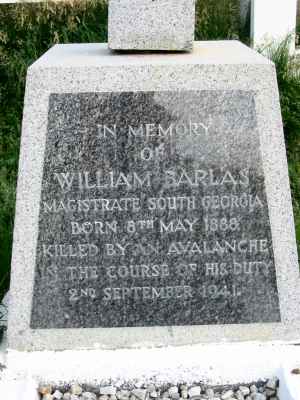 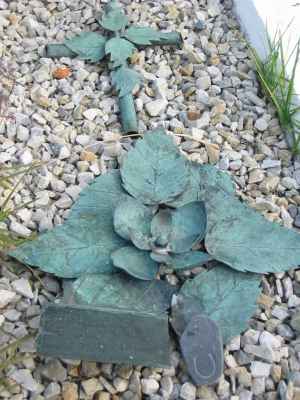