The grave register tells us that Richard died of acute beri-beri (Vitamin B1 or Thiamine deficiency) on board the factory whaling ship S/S Salvestria, where he worked as a labourer.

The magistrate's records at SPRI tell us that he died at sea, in position 60° 48' South 41° 33' West, and confirmed that was suffering from acure beri beri, which caused his health to decline over a period of two weeks. His father was a butcher in Stanley, Falkland Islands. He was single. The balance of his wages, £17 10s 6d was remitted to the shipping master in Stanley and his personal effects were forwarded on the 'Fleurus'.

The plate on the grave gives the date of death as 4 March 1933 whereas the register of deaths, and the inquest, give 3 March 1933. According to the SPRI records he was 26 and not 28 as his grave is marked. 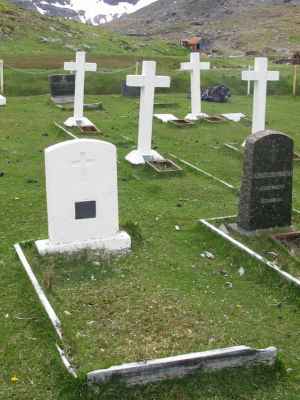 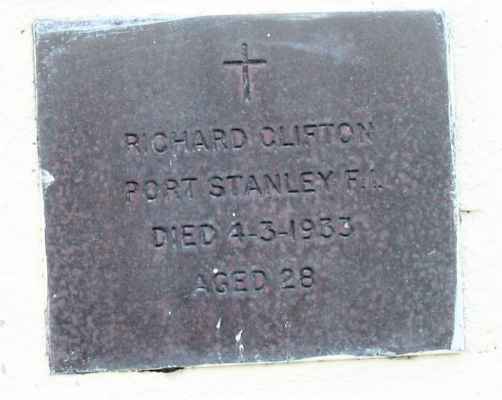 In 2011 Richard's great niece Bev wrote to tell us:

Richard was born in the Falkland Islands in1905 , the third of twelve children. He became engaged to a Falkland Island girl called Frances Whitney. In order to earn enough money to marry Frances, Richard (Dick) went south to Leith Harbour where he died on March 4th, 1933. There are two versions of his death:

Richard suffered from beri-beri and died at Leith Harbour. His niece, Pearl Clifton (McLeod) lived at KEP from 1957-1960. In 1960, after three years on South Georgia, Pearl was diagnosed with beri-beri. As there is a genetic form of beri-beri, this could be the true cause of Richard’s death.

Ernest Clifton (nephew of Richard and brother of Pearl)often  visited South Georgia on the ‘RRS John Biscoe’ from the late 1950’s until the 1970’s. Ernest was told that Richard died as the result of an accident. Richard was hooking whale meat and throwing it into the pots. The meat failed to fall off the hook and the momentum pulled Richard into the pot with it. Work was halted for about half an hour while his body was recovered.

Bev also sent a picture,probably taken in the 1950s: 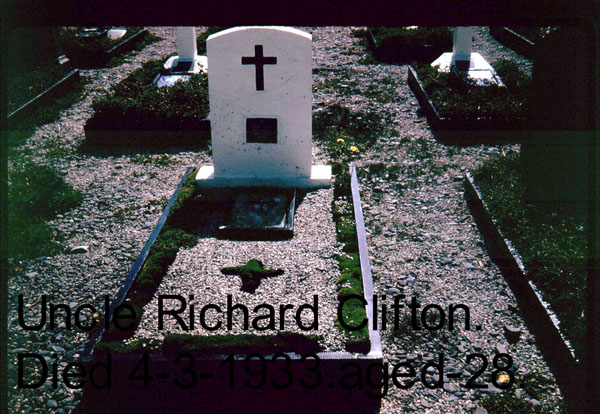