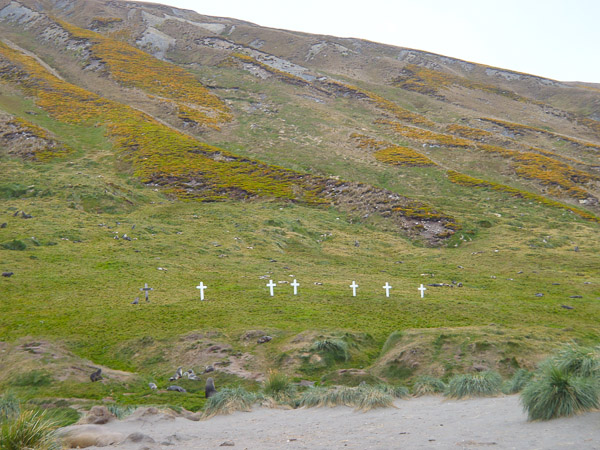 The Ocean Harbour cemetery lies on the Southern shore of Ocean Harbour, a little way from the site of the abandoned station, which operated until 1920. The oldest known grave on the island (Frank Cabriel, sealer, buried 1820) is here.

Seven names are known though the markers are too badly aged to identify all but one. It is thought that the eighth marks the reburial of a skeleton that was found when the station was being built. A second marker was identified in 2015 from old photographs.

"...When the whaling station, since abandoned and now derelict, was being built at New Fortune Bay in 1910 a man's skeleton was unearthed: the skull had a bullet-hole through it, probably a relic of some quarrel...."

In 2016 six new crosses were installed to replace the broken remains of the old ones.

The cemetery is easily and legally accessible to anybody.